THIS FEELING BY RE TEU

Emric John-Sawyer is a talented multi-instrumentalist who goes by the stage name Re Teu.  His new single, ‘This Feeling’, is the first to be released from the upcoming EP – “To Bask Within Your Tainted Light”. The dreamlike synths allow the single to make you feel as though you’re lost in a deep abyss. The almost hypnotic melody grabs you right from the start of the track and keeps you relaxed to this meditating sound. Polyrhythms within the track create a forever moving feeling that keeps you in a trance. I found it impossible to force this music into a box, therefore I came to the simple conclusion that his distinctive sound just can’t be summed up by a single genre. Heavy reverb keeps you in a hypnotic state when enjoying this track that is enriched with meaningful lyrics, showing the skill of this artists song writing.

Re Teu mentions “hold back this feeling” which I believe everyone can relate to in some way. Holding back a feeling is a common thing people are forced to do – the lyrics become relatable and emotive.  Minimalistic yet deeply effective chord progression allows for easy listening.

Overall, this song is a perfect soundtrack to reminisce, relax and take a breath in the chaos of this pandemic we’re all experiencing together! 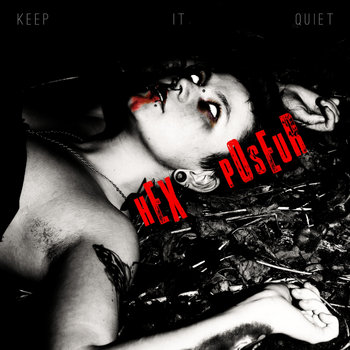 From the outset, this EP trickles into your eardrums like a parasitic guitar string worm, summoning all of the suppressed nerves and angst that, as a civilized member of society, you had learnt to keep quiet.

The distortion of the bass fills your head as the plucked melody raises hairs along your spine but that first lyric stood out for me:

You try, but you don’t know why,

You’ve got no fire,

No drive t-to put up a fight,

She whispers “lie” and everyone will keep on by,

Pay you no mind.

That struck a fucking chord.

Although ‘Quiet’ is clearly an always-timely feminist snarl at the hands of man which have worked to keep women in their place, there is something in here which speaks to both men and women. Something which stinks of Fight Club and “the middle children of history” who have no purpose or place, no great fight. A generation that has become limp and submissive in the face of a culture that values individualism and greed, one-upmanship and narcissism.

Twenty years on from Fight Club, there are clearly plenty of battles to fight.

It’s music like this which reflects the need to bite back, to assert ourselves onto the world and to prove to ourselves that we are alive, we have character and we have fucking balls – figuratively speaking.

I don’t know about you folk but I sure as hell have spent too much time being quiet, placid and pleasant and I have the sneaking suspicion that I’m not alone. Enough!

‘Quiet’ is the song that will be playing when you finally flip your office desk over, double fist punch through your cubicle wall and slam your misogynist boss Gary’s head into the fucking Xerox machine.

There has probably never been a better time for a punk resurrection. Sure it’s been tried over the years but 2020, with all of its frustrations and fuckeries, seems like fertile ground for a flare-up. Heck, my elderly neighbour Linda would probably be up for a mosh pit these days.

‘Overdrive’ is the track for the job. The second track on the EP is the bonafide, designated anthem for punk’s favourite speedball ballet. You know, the one where you can’t contain the rush of blood, the jacked-up nerve ends and the desire to love thy neighbour but also to swing clenched fists directly and intently at his person.

Both tracks on the EP pull together a handful of very noticeable influences into a rough and tattered tapestry covered in dirt and spit, nicely balanced by a clean production which retains the visceral, distorted drive endemic in punk.

Two pieces of violently self-assertive and forceful assaults on the authoritarian and domineering forces that have steered society and silenced the individual for too long. Well-matched for our zeitgeist.

There is such a thing as too much punk. This ain’t it. Cheers Hex!

Watch the video for ‘Quiet’ here

Sons of Sakanoue by Local Healers

Nottingham’s own rap duo, Local Healers, release their second album, ‘Sonsof Sakanoue’. With crisp production by DJ Fever and thoughtful lyrics by proven street poets Ty Healy and Nay Loco, Local Healers bring us more music to heal the soul. The duo conveys their perspectives on daily struggles and injustice in society whilst also sharing the importance of peace of mind and self-improvement as growing artists.

‘Sons of Sakanoue’ shows the steps that Local Healers have taken production-wise, implementing a more experimental feel and even taking influence from far-eastern instruments in the tracks ‘Mandrake’ and ‘Pray’. By relying less on hard-hitting, fast-paced beats and more on playful and bright melodies, the album has an upbeat and laid-back vibe which places more focus on the duo’s poetic lyrics. The delicate instrumentals and jazz-infused hooks in ‘Meditate’ is a perfect example of this, not to mention the track ‘Beautiful’, with its dreamy and ambient electronic patterns which rise and fall around the pair’s vocals.

Once again, the street poets boast their lyrical ability throughout the album, proving why they deserve to be set apart from other rappers. Tracks like ‘The Honourable’ offer an insight into struggles in the local community from drug abuse and depression to police brutality whilst exploring wider issues, such as the overarching influence of technology and the struggle for truth. Similarly, the more downbeat and punchy ‘Pray’ explores the general lack of justice seen in modern society and life’s daily curveballs.

With its impressive production and insightful poetry, ‘Sons of Sakanoue’ is another project which shows the talent coming out of Nottingham and the international appeal of this album goes to show the duo will not just be ‘Local’ Healers for long.

Watch the video for the track ‘Mandrake’ here

Buy the album on bandcamp here

After teasing us with a handful of promising singles, Marine Store Dealer release their self-titled debut album, and it doesn’t disappoint. Hailing from Nottingham, Luton and Istanbul, the four-piece, grace us with an album as diverse as the band’s origins, paying homage to 90s American alt rock and grunge whilst blending influence from more modern indie bands. Merging thrashy guitar and punchy drums from the likes of Sonic Youth, with melodic outbursts and bright synths may seem like a risky combination but the group manages to bring the two together beautifully.

The use of dark grunge and punk elements which explode into bright, euphoric climaxes is seen throughout tracks like Aeroplane and Thousands. Distorted guitar and hard-hitting drums begin to take you down the path of traditional alt rock before taking a detour through the modern age. The voice of Gemma Upton proves itself to easily fit into both genres with songs like ‘Make It New’ and ‘Watching You’ showing off her ability to take influence from the punk age whilst constructing catchy hooks which will be stuck in your head long after the first listen. Glorious synth progressions are found throughout the album, displaying the electronic expertise of the group and exaggerating the contrast between dark and light in tracks like ‘Water’.

With its diverse palette of sounds, ‘Marine Store Dealer’ will not only be a favourite for grunge and punk fans but is likely to convert the sceptics of those genres by exposing them to its rawness, whilst maintaining the modern, euphoric sounds of electric-infused rock. It is safe to say that this album will be a tough act to follow but with this very promising debut, the sky is the limit for Marine Store Dealer.

The album, self titled ‘MARINE STORE DEALER” will be out on the 16th October on all digital platforms and from their bandcamp here!

Watch the video for ‘Make It New’ here

You can be the first one to leave a comment.